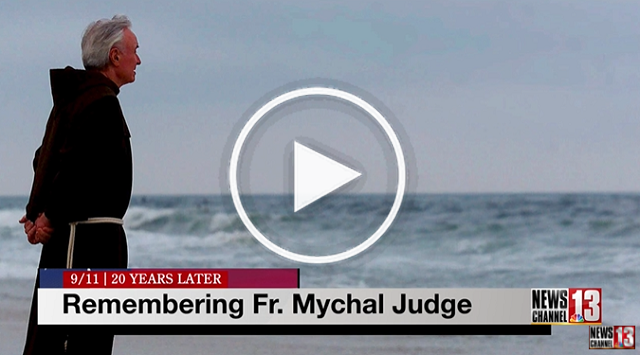 During the September 11, 2001 terrorist attacks, nearly 3,000 people were killed, beginning with Fr. Mychal Judge. An assistant to the Siena president in the 1970s, Judge would become the first certified death of 9/11. Twenty years later, his memory continues to inspire.

In 1992, Fr. Mychal, a Brooklyn native, was appointed chaplain to the New York City Fire Department. He counseled firefighters and their families, and he offered encouragement and prayers at fires and rescues. So, when he learned the World Trade Center had been struck by a plane, he went to work.

Fr. Mychal first prayed over bodies at Ground Zero, then he entered the World Trade Center North Tower to offer aid and prayers to the rescuers. When the South Tower collapsed, debris crashed into the North Tower lobby, killing many, including Fr. Mychal. Because his body was the first to be recovered, Fr. Mychal was designated as Victim 0001. He was 68 years old.

On the 20th anniversary of the attacks, many media outlets recounted stories of the 9/11 heroes, and some fondly remembered Fr. Mychal's lifework and his bravery on September 11. NewsChannel 13 interviewed Fr. Sean O'Brien, O.F.M., who knew him well.

"He had the gift of empathy and really entered into other people's suffering and pain. He was right there with them. Debris is falling and things are very chaotic, and he is just so enmeshed in the whole scene and is fervently praying that God's grace is going to somehow be revealed in this tumultuous situation."

"The beloved Franciscan priest lives on through Brian Jordan, just a college kid when he accepted Judge’s challenge to join the priesthood. He survives in the heart of John Bates, who continues to host an annual September march remembering Father Judge’s legacy. He endures in the daily thoughts of gay activist Brendan Fay, who strives to channel the white-haired priest with the brown robes and sandals." 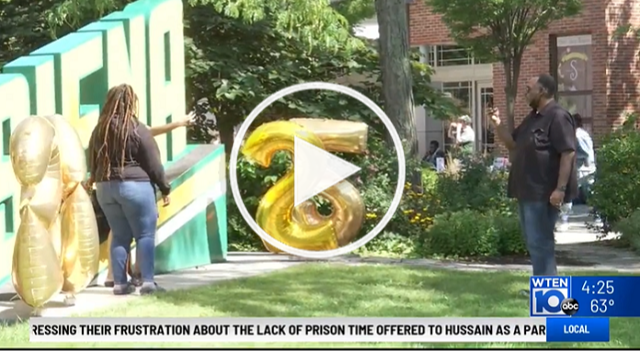 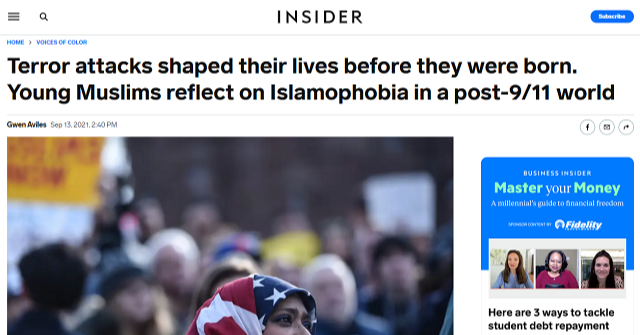 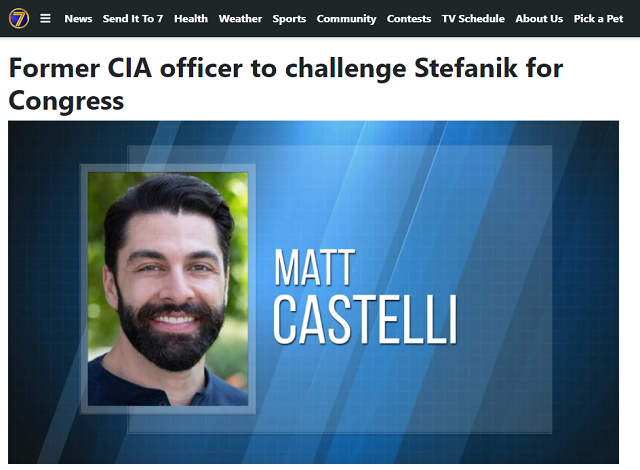 Matt Castelli '03 announced his bid for Congress this month which made headlines through the Northeast. He'll compete for the seat in New York's 21st Congressional district, a move he's contemplated since taking a seat in Dr. Len Cutler's class 20 years ago.

In fact, Castelli recently reflected on his Siena education for a Saints Don't Sit on the Sidelines piece produced by the College's Annual Fund.

"On the morning of September 11, 2001, I was sitting in Dr. Leonard Cutler’s Constitutional Law class when the first plane struck the World Trade Center. Siena’s strong tradition of service had me already exploring a career in public service but the 9/11 terrorist attacks galvanized me to focus on bringing those responsible to justice and preventing future attacks against the United States. I was a political science major and criminal justice minor with Dr. Cutler serving as my advisor and guiding me towards participating in the Washington Semester Program at American University where I was the very first intern at the Department of Homeland Security. When I returned to Siena, his guidance continued by steering me towards an internship at the New York State Police’s Counterterrorism Unit. These two experiences were pivotal in setting me up for future success at the CIA and the White House and would not have been possible without the support of professors and mentors like Dr. Cutler."

The Saratoga County resident spent nearly 15 years with the CIA and worked in both the Obama and Trump administrations. He's the fourth Democrat to announce his candidacy in the 21st Congressional district. The primary will be held in June of next year. The winner will face Republican incumbent Elise Stefanik in November's general election.

"The Franciscan tradition has deep roots within my family as my grandparents were Third Order Franciscans. I was proud to carry the tradition of service and advocacy for others as brothers and sisters at Siena. Serving our communities is living out the Franciscan tradition in the truest sense - serving a cause greater than self to make a world that is more just and peaceful. When you dedicate yourself to such a mission the stakes become a lot higher. The success of that mission is often dependent on teammates looking out for one another. It’s important to have the backs of those who serve so they can continue to have ours and I believe that’s at the heart of the Franciscan tradition."

From the sports page 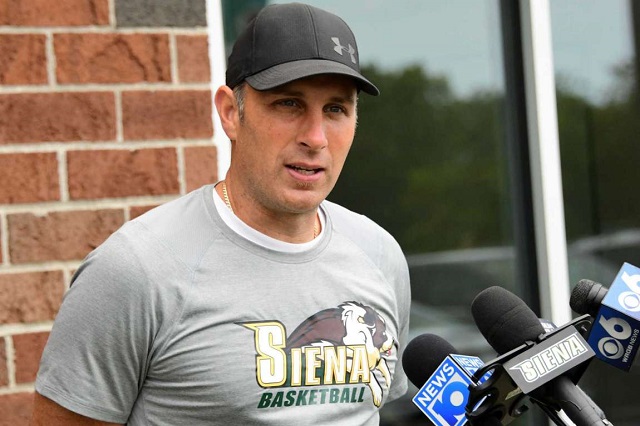 The Siena men's basketball team hasn't played a game at the Times Union Center since trouncing Niagara at by 22 points on March 4, 2020. The announcement of their grand return downtown made news throughout the region.

The Division I Saints and the Division II College of Saint Rose Golden Knights will meet in an exhibition game on Monday, October 25 at 7:00 p.m. from the TU Center. The Times Union was among the many outlets to report on the first ever match-up between the neighboring programs. Siena head coach Carmen Maciariello was once, briefly on the Golden Knights' roster (for two days), before switching to Siena.

"I'm just excited to be able to have Siena play Saint Rose," Maciariello said. "I know (retired St. Rose coach) Beaury had wanted that a long time ago and it was never able to happen. Coach Beaury's a good friend and I really respect him and Mike (Perno) is doing a good job there and I think it's a great time to play the game."

The preseason matchup is Division I Siena's first exhibition in four years dating to the 2017-18 season, when the Saints lost to Division II Le Moyne at the UHY Center (then called the Alumni Recreation Center). It's their first exhibition game at the TU Center since a 67-59 victory over Division II Adelphi on Oct. 30, 2010.

Siena opens the regular season at St. Bonaventure Nov. 9 before its home opener against Delaware Nov. 13 at the TU Center.

According to a Siena College Poll... 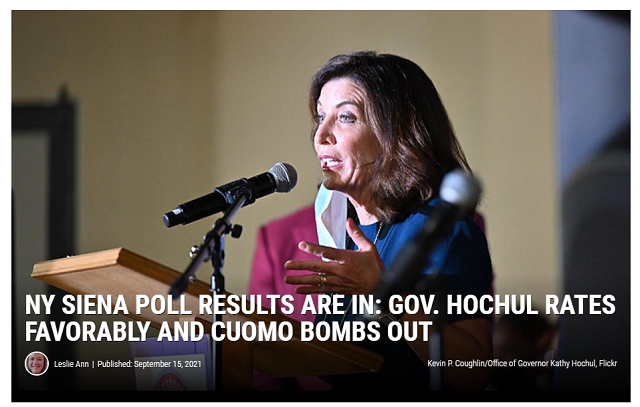 ...Governor Kathy Hochul is scoring high marks from New Yorkers with an opinion.

A Siena College Research Institute poll of 700 New York State registered voters conducted from September 7-12 found that Governor Hochul is viewed favorably by 42 percent and unfavorably by only 17 percent, which leaves a large swath of New Yorkers who have yet to form an opinion of the new governor. WGRZ-TV in Buffalo addressed the findings.

...more than two-thirds of New Yorkers support mandates requiring teachers and staff in public schools to be vaccinated.

Staten Island Live published the SCRI data and also noted that a majority of New Yorkers believe small businesses should require proof of vaccination to enter.

CNY News pointed out that 67 percent of those polled agreed with Cuomo's decision to leave office. The SCRI results also show that Cuomo's favorability numbers had dipped to an all-time low of 34 percent.

The Siena Heat Map tracks Siena College mentions in the news all across the country. In the past month, there have been more than 400 Siena mentions coast-to-coast (including SCRI and athletics coverage). Including...

Talk about geckos (which is different from Geico's talking gecko)

Geckos fly at ballistic speeds from one tree to the next, violently crashing into their landing zone all while avoiding injury. But, how? Greg Byrnes, Ph.D., associate professor of biology, along with fellow researchers in Germany and California solved the mystery. And it's all in the tail.

The geckos don't slow down on approach, instead they use their tails to absorb the energy of impact. The findings, which were reached using robots, were published in Communications Biology, an journal that publishes high-quality research across all areas of biology. Because of their work using gecko-inspired robots in their experiments, FocusTechnica picked up the story. From there, it spread to CNN (Dr. Byrnes isn't referenced by name in the CNN coverage, but his colleague is quoted).

"If an eagle were to land on a branch it would slow down with its wings so that the speed was almost zero and then it just touches down. It's a graceful landing that requires a lot of control. The gecko does the exact opposite of that," said Ardian Jusufi, a researcher at the Max Planck Institute for Intelligent Systems in Germany and the leader of the institute's Locomotion in Biorobotic and Somatic Systems research group."