Skip to Main Content
Home
News
SIENA IN THE NEWS: May 2021 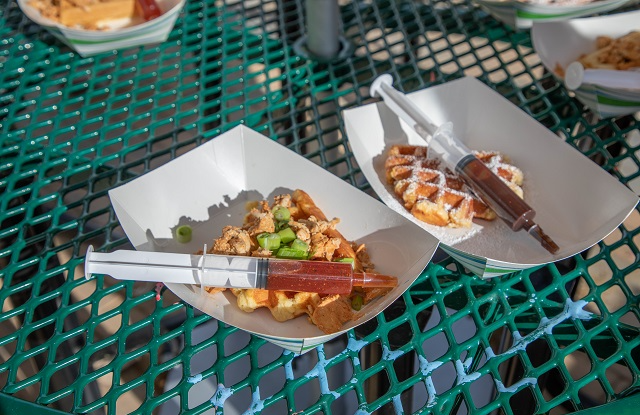 The Nashville hot honey glaze pairs sublimely with the smoked chicken and the savory Belgian waffle. Add a little or a lot, depending on how hard you squeeze the syringe (below, right)

The Student Senate, in collaboration with Siena Fresh, hosted "Getting Real About the COVID Vaccine" on May 12. Over chicken and waffles, two recent graduates led a discussion about the vaccine geared toward the vaccine-hesitant. The event is part of a broader effort by the Student Senate COVID Safety and Vaccine Committee to educate the community and get as many Saints vaccinated by Commencement as possible.

"Just trying to ease some fears of some students, but also get students to be able to tell their friends to get vaccinated so we can hopefully have everyone vaccinated and have a safer community campus."

The student-led push made Capital Region news, and Nathaniel Kim '22 was the focus of a April 29 article in the Daily Gazette. The story foreshadows the May 12 event. In addition to chicken and waffles, Nutella waffle pop was served (the Nutella sauce was also available in syringes). 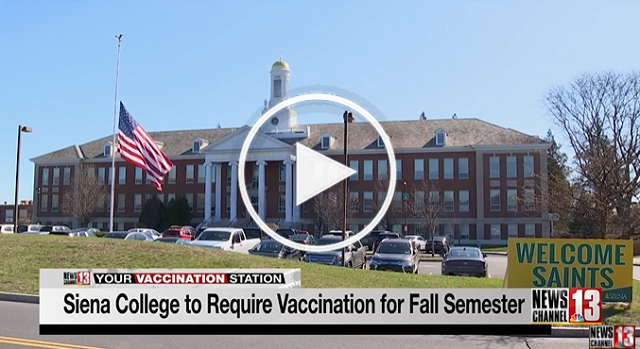 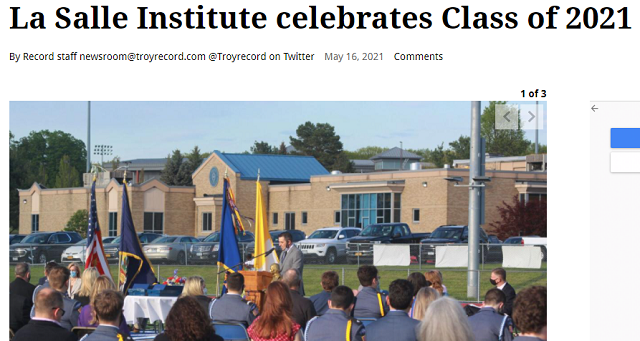 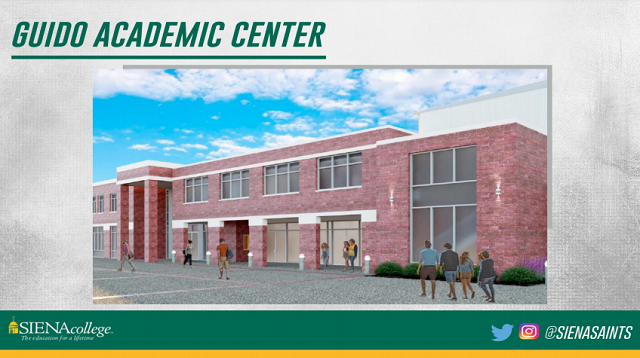 Two-sport star Bob Guido '68 always found it challenging to juggle his athletic commitments with his academic obligations. His $250,000 gift will ease the burden for current and future Saints

Construction will begin this summer or early fall on the Bob Guido '68 Athletic Academic Center, a nearly 1,000 square-foot space for Siena student athletes to study. The academic center will be an addition to the MAC and will feature rooms for group projects and individual tutoring.

In the 1960s, Gudio played football and baseball for Siena while earning his degree in accounting and finance. Gudio then parlayed his education into a successful career with Ernst & Young and retired as vice-chair. The majority of Siena student athletes won't play their sport professionally, but they'll be professionals in something else. That's the motivation behind Guido's gift, as he explained to the Times Union.

"The whole thing goes back to what do we really want to stress and be noted for at Siena. It's to help the kids grow personally and professionally. Sports are important and the team concept is important, but it's kind of what are you going to do for the rest of your 60 or 70 years after Siena that's more important. That's why I wanted to do this."

Guido and his wife, Charlotte, now live on St. Simons Island in Georgia. But from 1,000 miles away, their lead gift toward the $950,000 project will improve the academic experience for 350 Siena student athletes. Of course, Saints already have a history of excellence in the classroom. Last year, a new record of 210 Siena student athletes were named to the MAAC All-Academic Team, which honors those with a cumulative GPA of 3.20 or higher. 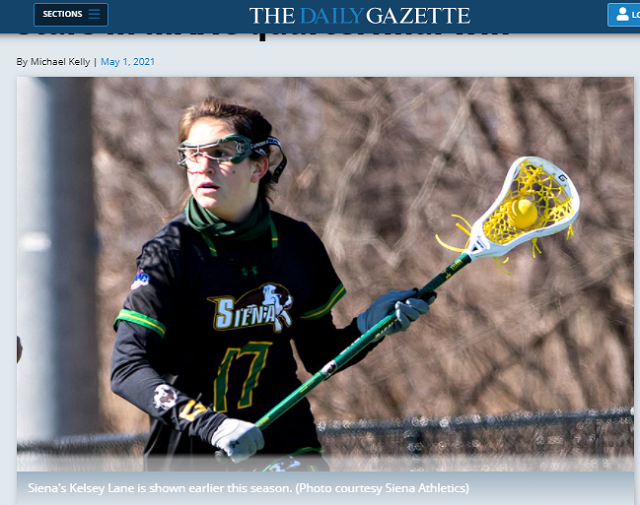 Kelsey Lane '21 had scored just two goals in her entire Siena career before leading the Saints on a magical ride to the MAAC championship game.

Pop quiz: how many ligaments are in the knee?

In 2018, just before her freshman season began, Lane tore her ACL, MCL, and LCL. Oh, and she sprained her PCL for good measure. The right knee required a full reconstruction, and the recovery cost Lane her freshman and sophomore seasons. Then, ready to return for her junior season, COVID happened and there was no junior season.

This spring, she finally returned to action and scored two goals over the course of the regular season. Then, as the Daily Gazette reported, in the quarterfinals of the MAAC tournament, Lane scored three goals in a 21-11 win over Canisius (in one game, she scored more goals than she had in nearly four years as a Saint).

"My teammates, they were able to just get me the ball, and I had the easy job - to just put it away. They did the hard work for me."

Lane humbly scored twice more in Siena's 20-11 win over Monmouth in the semifinals. Siena's season ended one win shy of a championship. The Saints lost to top-seeded Fairfield 12-8 in the title game.

According to a Siena College Poll... 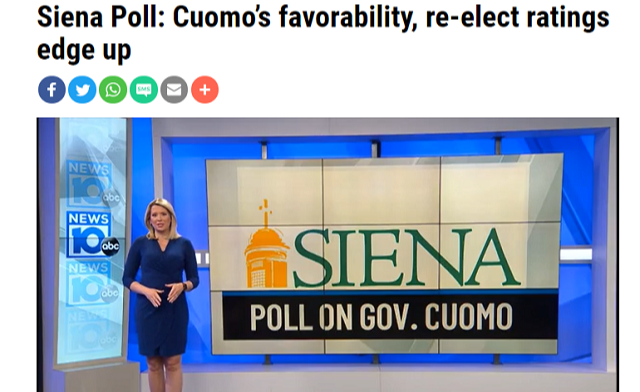 ...53 percent of New Yorkers prefer 'someone else' other than Gov. Andrew Cuomo in the run for governor of New York in 2022.

A poll conducted by the Siena College Research Institute from May 16-20 was answered by 793 New York State registered voters. The survey took a deep dive into the 2022 New York gubernatorial race. The results, released on May 24, made news across the country. Different outlets highlighted different conclusions. The Oneida Daily Dispatch noted that 37 percent are prepared to re-elect Cuomo if he runs next year, compared to 53 percent who prefer 'someone else.' Those numbers have improved for the Governor since last month, 33-57.

...49 percent of New Yorkers do not believe Governor Cuomo should resign compared to 41 percent of those surveyed who do.

New York 1 noted that the difference along party lines. Among Democrats, 59 percent do not support resignation. Independent voters are evenly split on the resignation question. Cuomo has been accused of sexual harassment or misconduct by multiple women since the end of last year.

News 10 ABC reported that, based on the Siena College poll results, Cuomo's favorability has improved this month to 44-48 percent, up from 40-52 percent just one month ago. Voters also support a law, 62-32 percent, requiring college students to be vaccinated for COVID-19 before returning to campus in the fall. 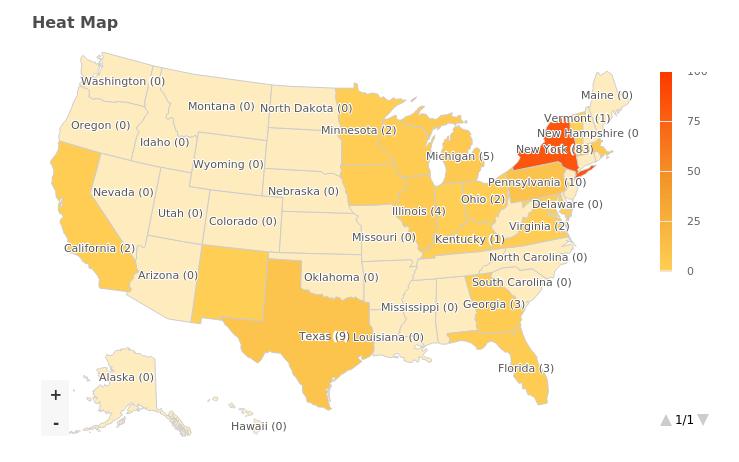 The Siena Heat Map tracks Siena College mentions in the news all across the country. Since May 1, there have been more than 200 Siena mentions coast-to-coast (including SCRI and athletics coverage). Including...

A piece in the Long Island Herald about high school lacrosse and pediatric cancer. 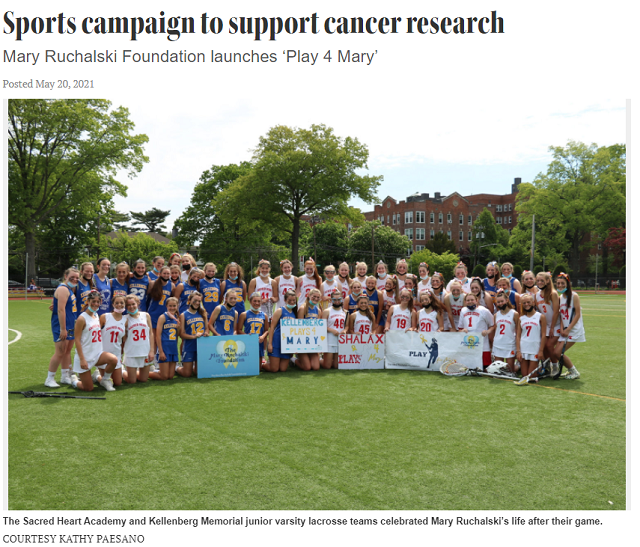 Mary Ruchalski of Rockville Centre, Long Island was only 12 when she died a few years ago of a rare cancer, rhabdomyosarcoma. Mary was a talented multisport athlete who enjoyed softball, basketball, swimming, soccer, and... lacrosse.

Mary's older sister, Ashley Ruchalski '16, played lacrosse for Siena. Last year, she asked if her alma mater would participate in the inaugural "Play 4 Mary" tournament to raise money and awareness for pediatric cancer. Ultimately, the pandemic scrapped plans for the 2020 tournament, but as the article notes, Siena was the first program to commit to the event. Boston College, Columbia, Hofstra, and Holy Cross joined the movement as well.

The Work is Never Done

Leave No Apples Behind