Skip to Main Content
Home
News
Inside Look: What Does the FeelGood Club Do?

Inside Look: What Does the FeelGood Club Do?

Two words: grilled cheese. If pairing that classic, oh-so-comforting, ooey, gooey sandwich with the idea of ending world hunger, while spending time with like-minded friends, all sounds like the greatest thing since sliced bread to you (we had to)...allow us to introduce the FeelGood Club.

Last month, two students gave you an inside look at the Outing Club, one of Siena's 70+ clubs and organizations that keep our students busy, entertained, active and having fun. This month in our Inside Look blog series, get to know the FeelGood Club with help from Rachel Kavney '18, an accounting major from Syracuse who has been a FeelGood member for almost two years.

What's the mission of the FeelGood Club?

"The mission of the FeelGood Club is to end extreme hunger and poverty by the year 2030. Groups of students on college campuses across the country, including our club at Siena, sell grilled cheese sandwiches at delis to raise money. That money is given to the Commitment 2030 Fund, which includes organizations such as The Hunger Project. Not only are we raising money to end world hunger, but we are also working to achieve gender equality and economic prosperity in third world countries."

"The FeelGood organization was founded by Kristin Walker and a group of cross country runners at the University of Texas at Austin. She decided to sell grilled cheese sandwiches in exchange for a donation, and she soon realized that these sandwiches would start conversations about a greater cause. Since then, over 20 chapters have started clubs on their campuses. Our club at Siena offers at least three types of grilled cheese at each deli, with an interesting option including apples, cinnamon, syrup and cheese." 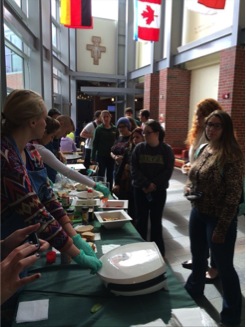 How often does the FeelGood Club meet and sell sandwiches?

"We meet every other week, and we sell sandwiches in the atrium of the Sarazen Student Union once a week. We also sell grilled cheese at other events, including a few events that the Student Events Board on campus puts on."

What's the most rewarding aspect of being a member?

"The most rewarding aspect is being part of a larger movement to end world hunger. Being a college student, there is not always much that I can do to help people that really need it, but this has been such a great way to get involved in a simple way and all from right here on campus."

How can new members get involved?

"As a club, we are always looking for new members. We have a table set up at the club fairs in the fall and spring semesters, and that is where most of our members will join; however, members can also come to one of our delis and ask to join, or just come to our next meeting and bring friends! The more the merrier!"

Got a favorite memory from the FeelGood Club?

"My favorite memory was the first deli that we held as a club last year. As a freshman, I was pretty nervous about making grilled cheese for the club and talking to customers about us and what our goals are. I was grateful when I saw the line of people waiting for sandwiches because they were all willing to donate to a great cause and were excited to work towards the same goals as us, and that was very rewarding."

For the grilled cheese lovers... Do you cut vertically? Diagonally? In fours?

"I cut it vertically, but we can always personalize based on your grilled cheese needs. :)"

Interested in joining the FeelGood Club, or one of our many other organizations? Complete your application to Siena College today!

English majors are in demand