Skip to Main Content
Home
News
In the News: Summer 2022 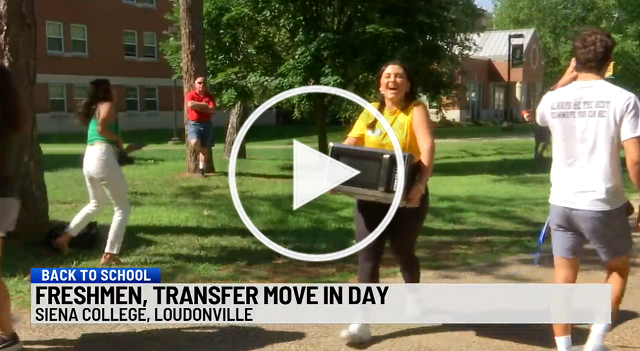 Is moving a microwave into a residence hall (above) really newsworthy? It is at Siena! No college celebrates Move-In Day quite like the Saints.

The operation ran like a well-oiled, green and gold clad assembly line. A new Saint and their family would pull up to the curb and a team of spirited Orientation leaders, ambassadors, and staff would swarm the pile of luggage. Within minutes, the first-year Saint was moved in, without having lifted a finger. News 10 ABC covered the choreographed chaos and spoke with Katie Szalda '01, director of admissions.

“It’s the best day of the year. Today is the day where the community comes together and welcomes our new Saints to the Siena family. It’s fantastic, full of energy, and the entire community looks forward to this day every year!”

One of those new Saints, Grace Foster '26, also spoke to the news crew (likely not something she anticipated when she woke up that morning!). When asked what she was most excited about, she captured the spirit of the day perfectly.

"I'm most looking forward to meeting new people and building my friend group, my circle, and just getting out there and becoming more outgoing."

NewsChannel 13 promoted Move-In Day on Move-In Day eve. On the College's Flickr page (below, right), you can check out dozens of pictures from "the best day of the year." 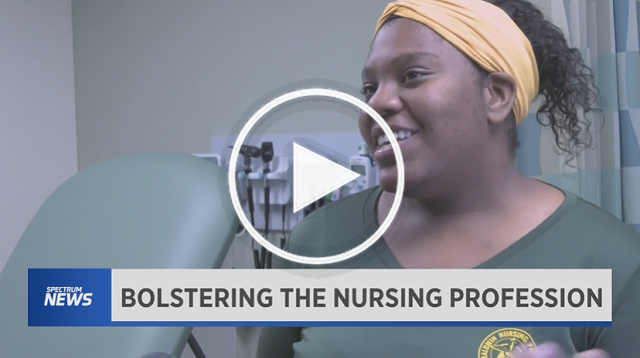 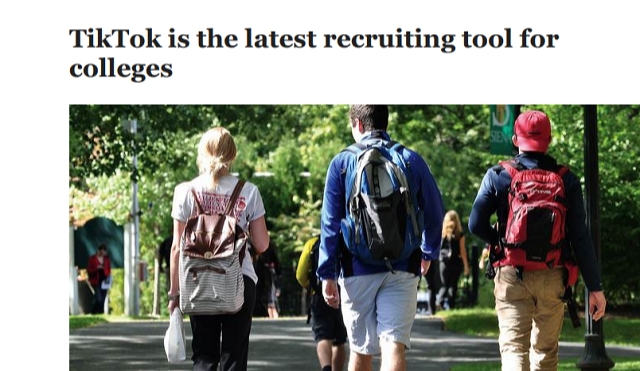 Only ten percent of minor league baseball players will ever make to the majors. After nearly a decade chasing his childhood dream, Siena's Matt Gage got the call.

It took Gage only 13 pitches to complete a perfect ninth inning, including two strikeouts, in his major league debut. He had waited his whole life for that moment, but he was happy to race through it.

In Toronto's 8-0 win over Kansas City on June 6, Gage became the 5th former Saint to represent Siena in the Major Leagues. A former 10th round draft pick of the San Francisco Giants, he bounced between affiliates (and non-affiliated teams) before earning a call-up to "The Show."

Gage has appeared in 11 Major League games this year sporting a 1.38 ERA. His journey from Siena to the big leagues has been covered this summer regionally (News10 ABC, above, among many other outlets) and nationally (The Athletic).

A different jersey and nearly a decade later, but the throwing motion looks exactly the same (below). 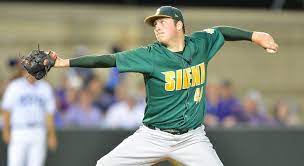 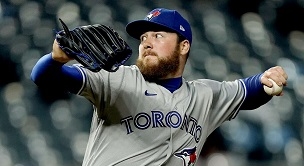 The Siena men's basketball team went 2-1 on its 3-game exhibition tour through Italy, but the trip was about more than basketball.

Situated at the foot of the Alps in Northern Italy, Lake Como is the third largest of the Italian lakes. The scenery is breathtaking, but if you want to go for a swim, make sure to watch your step.

"You had to kind of scale some rocks so we were just making sure we didn't cut our feet up too bad because they had to play the next day," head coach Carmen Maciariello '01  said. "But it was just really enjoyable. Like I said, we have a great group of guys and they really care for one another."

Siena used its Italy trip for team bonding as well as basketball conditioning. They got plenty of both. As the Times Union reported, Siena won its first two games, but got beaten a professional Italian club in its farewell game.

"Yeah, it was kind of designed that way," Maciariello said. "The last team we played was in the semifinals of (Serie) A2 to get to the championship to move up to A1, which is obviously the highest league (in Italy) ... I knew I had some guys that needed to get some rust off."

The Saints play their regular season opener on November 7 at Holy Cross.

In other sports news... The Times Union told Simone Asque's story of mistaken identity on campus. The 32-year-old first-year volleyball coach has met plenty of friendly faces since taking the job, except plenty have confused her for a student.

"I love it," she said. "I'll take it as long as I can. 'Hey, hon, how were your classes? How were finals?' I'm like, 'I'm done with those years ago, but thank you.' There will come a year they won't mistake me anymore."

...President Biden is viewed favorably among Democrats, but only 26 percent would like to see him run for a second term.

According to a Siena College Research Institute poll, approximately a quarter of potential Democratic primary voters want to see Biden as the 2024 nominee. The results of the poll where shared by CNBC. The survey also polled respondents about a potential 2020 rematch between Biden and former President Trump. According to the results of the survey, Biden wins the hypothetical matchup by three points.

An SCRI poll used 11 aspects of life to gauge satisfaction. As reported by the ABC affiliate in Syracuse, only 27 percent of New Yorkers are more satisfied with their lives this year compared to 33 percent who are less satisfied. What are the primary reasons? SCRI Director Don Levy explains for WSYR-TV. "When considering all residents we see the largest drops in satisfaction with family relationships, where they live, their finances, what they do for work, and their health.”

...the top five American presidents of all time are Mount Rushmore plus one.

SCRI polled 141 presidential scholars and had them rank America's presidents from first to last by assigning each commander-in-chief a score on 20 different attributes. As the Boston Globe printed in its report on the survey's findings, President Biden enters the conversation at number 19 (of 45 presidents). Franklin Delano Roosevelt checked in at number one, followed by the Rushmore four (Abraham Lincoln, George Washington, Theodore Roosevelt, and Thomas Jefferson).

The Siena Heat Map tracks Siena College mentions in the news all across the country. From June through August, there were more than 8,700 Siena mentions coast-to-coast, including...

The story of a 1964 graduate who has been tooting his own horn for more than 70 years.

Joe Miller '64 wanted to spend his retirement playing his horn, so he started a band.

Miller graduated from Siena with a degree in mathematics and physics which led to a job at General Electric. Eventually though, Miller shifted careers from his science to his first love, music.

When Miller was 12, he joined the Mechanicville City Band. Two decades later, he went into music education, and a couple decades after that, he founded the Capital Region Wind Ensemble. In 2019, Miller and his wife moved to Lakewood Ranch, a planned community near Sarasota, FL. Miller looked for a new band, and when he couldn't find one, he made one. Your Observer, covering Sarasota, told his story.

"This area is home to outstanding musicians who have had notable careers and those were the musicians I was looking for," said Miller.

He found them. The Lakewood Ranch Wind Ensemble gave it's premier performance in 2019 in front of 300 people. They lost two years to COVID, but the ensemble of 60 members has five concerts scheduled for the 2022-2023 season.

$500K for the Education of Nurses

Every Student Has a Story: George Pounds '23