Research is the name of the game at college—and it involves a lot more than Googling stuff or going to the library. Students at Siena are making discoveries, inventing new things, solving problems, presenting their research at conferences and getting published. But what does research really look like? If you’re like most high school students, the concept of research is still a little unclear. That’s why we’re using our blog to unmask what research really means—and how it can seriously shape our world.

Join us as we talk with some of Siena’s research students about their projects. We’ll discover what they’re literally doing when they’re “researching” and how conducting research in college can lead you to an amazing future and quite possibly change lives.

Today, we’re looking at data analytics—it’s pretty much the work of the future. 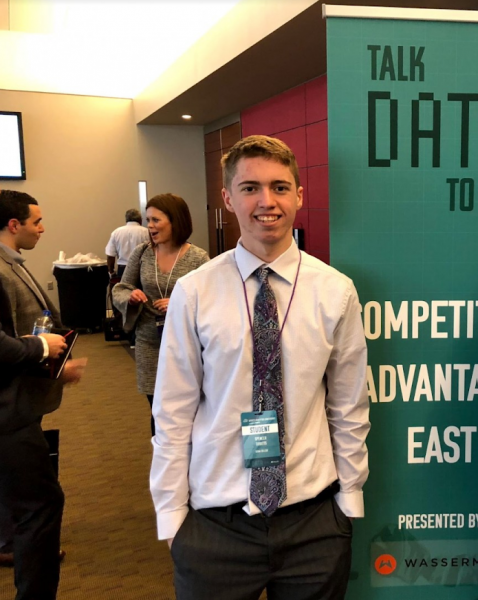 Coming from just down the road in Albany, New York, Spencer is a junior at Siena who is not only a scholar—hello, double major in physics and math!— but he’s also starting a golf club to take advantage of the many local golf courses in the area.  Spencer is spending 6 weeks of his summer hard at work in Dr. Matthew Bellis’ lab in the Roger Bacon building, getting down with some  computer code and data. What’s he working on? Spencer is using science to uncover a potentially game-changing tool for athletes and the sports world.

Before we dive into the awesome work you’re doing, tell us how you got started on this project.

In February or March every year, the whole physics department presents their research topics. They all present their research ideas for the summer. Last year, after Dr. Bellis talked about a project he was working on, I emailed him and said I was interested in helping out. So, me and another student worked on it last year. And then this summer I got back into it.

Data Analytics? The NBA? What’s your project all about?

We have tracking data from NBA games, and we’re trying to use the data from the video analysis to see if we can track player fatigue. We contacted a company, SportVU, that used to run all the video analysis, tracking data for the NBA, and they have cameras installed in the stadium. They gave us one game’s worth of data at the start. Then, we showed them some of the stuff we had done with it, and they emailed us an entire playoff series from that year between the Celtics and the Wizards!

The whole idea is to see if we can tell when or if a player is getting worn out or tired. Like Steph Curry, right? You can see throughout the game, maybe at the start he’s really hustling, putting in a lot of work. You can see his scoring in the first half, when he’s moving fast, he gets like 30 points. And then the second half, you see it kind of drops down; so, maybe he burned out of energy or something.

It’s kind of tough to tell just because those guys, they’re at the top. They’re athletic, and they’re so well-trained. They can last a 48-minute game like it’s nothing. And a lot of them push through. But we still want to find out, do coaches need to rest their players between games to keep them healthy?

So what does one actually do when analyzing data?

A little bit is watching. A lot of it is sitting at the computer, trying to figure out how everything works and trying to extract all the data. All the data is encrypted using Python, which is a computer language. So we go through and learn how to sort through all the data.

Part of is presenting too. We actually applied to present a paper at the MIT Sloan Sports Analytics Conference. We got to go out to that talk, and I also applied for the Hackathon. I got in, and through there we got another 15-games’ worth in data from another company.

What new skills have you learned through this research?

I’ve definitely learned a lot about computer code and that I like data science a lot. My skills have definitely gotten a lot better through this—more than what I could have learned in class, for sure.

What connections have you made through this research?

When we were at the sports conference, that was a lot of networking, for sure. ESPN, all those big companies were there.  A lot of NBA teams and owners were there. Steve Ballmer, the owner of the Clippers, was there. And they had pretty much all the data analytics guys there, so we were trying to bump into everyone we could and just say, “Look at this!”

What would you tell a high school student about doing a research project in college?

Definitely, definitely do it. It’s a good experience. It looks good when you’re applying for jobs. You really find out if you like what you’re studying, too, because it’s our first time really doing any kind of long-term project.

That’s great advice. So, as a local, what made you choose Siena?

I really like the campus. I like everyone around here. They’re nice and friendly and pretty open. I’ve really enjoyed the first two years so far. I think because it’s a smaller class size, too, and all the teachers know you. I have friends on campus that I hang out with all the time. And the physics department is definitely very good.

Have you enjoyed working with Dr. Bellis?

He’s great. Yeah, he’s the man. My first semester, I took a class with him. It was an intro to computer science for engineers. And then I think I’ll take quantum physics with him in the future, so I’m definitely looking forward to that.

Spencer, you’re awesome. Thank you for chatting with us!

How to Rock Your College Interview Over Zoom

What To Ask A Transfer Admissions Counselor