Skip to Main Content
Home
News
In the News: September 2022

There were 1,000 backpacks carefully placed and spread throughout the Academic Quad. Each backpack told a personal and heartbreaking story. Their collective story – Siena's mission to "Send Silence Packing" – was told by several media outlets.

The immersive experience filled the quad with 1,000 backpacks representing college students who lost their lives to suicide. The purpose of the backpacks is to spread awareness and help start a conversation about suicide prevention. News 10 spoke to the Director of Health Promotion Kate Kaufman Burns.

“The goal is to reduce the mental health challenges and show students where to turn to if they need help.”

Associate Director of the Counseling Center Tom Templeton told Spectrum News 1 (pictured above during an interview with CBS6) that, as a society, we're not as comfortable talking about suicide as we need to be.

“If you’re concerned, it’s OK to ask the question directly. Are you contemplating suicide? Because some people are just waiting to be unburdened to answer that question truthfully.”

The CBS6 piece noted that data released from the Department of Health and Human Services shows the new national suicide prevention lifeline – the 988 number which went into effect in July – may have saved more than 150,000 lives last month. As Active Minds vice president Jonathan Limey '24 told Spectrum News 1,

"I know events like this are the reason why I’m here today, and so I want other people to be able to say that. 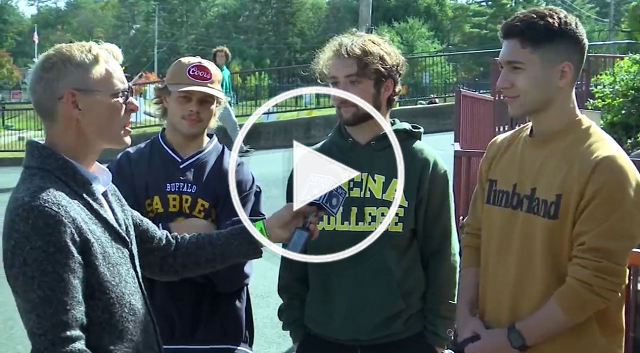 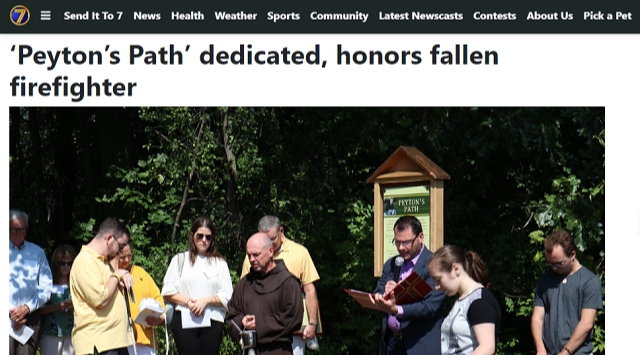 Beth Smith-Boivin '82 is the executive director at the Alzheimer's Association, Northeastern New York. She ensures the delivery of quality care and support services to people impacted by Alzheimer's. That's a noble and interesting fact about Beth – the Times Union shared 20 more.

Beth was recently featured in the TU's 20 Things You Don't Know About Me column, and two of the 20 included references to Siena.

7. My love of music started with my dad, who began his part-time career as a disc jockey in college and finished it as the long-time host of WVCR’s “Smitty and Friends.” When my siblings and I were young, we spent many Sunday afternoons "hosting" our own 30-minute radio shows for an audience of three.

20. Forty years after graduating from Siena College, I am blessed to count my roommates among my best friends.

She also talks about her career in Alzheimer's and her volunteer work, which she described (separate from the article) is a reflection of her time at Siena.

"In the many years since I graduated from Siena College, I’ve come to understand that the most valuable lessons I learned there happened outside of the classroom. Siena instilled in me the importance of critical thinking as well as the value of service to others. As such, I know how important it is to lead with a strategic plan and the understanding that it may need to be modified as circumstances dictate.

If you are not or have not volunteered in your community, I urge you to do so with the promise that the return will be much greater than the investment."

A year after winning a national championship, the men's rugby program is facing tougher competition. But, the end goal is still the same.

The program developed what they thought would be a four to five year plan to compete for a national title. They are dramatically ahead of schedule. After winning a championship in year one, the Saints were moved up to the Liberty Rugby Conference, which is part of Division 1-AA. As the season gets underway, the Times Union checked in with the squad.

"I think there's a lot of eyes looking down on us, which is exciting," said Siena senior flanker John Lynch of White Plains. "Going from a small-cup championship to playing in the AA leagues, people might look down on us, look over us. We like being the underdogs. We're ready to show people what we're about, what we're coming for."

According to head coach Jaco Visser, the 1-AA players are 10 to 15 pounds heavier at forward and there's more skill. The Saints went 10-0 last year, and were rarely challenged. Coach Visser expects stiffer competition this year.

Maybe the games will get tougher, but Siena opened its season with an 89-0 win over crosstown rival UAlbany. In fact, the start was enough to grab the attention of the National Collegiate Rugby committee, which scheduled a league alignment meeting during which they made the extraordinary decision to move Siena to D1 as of November 12, 2022. The Saints will complete the regular season in D1-AA and will then move into the postseason at the D1 level.

...the Senate race in Wisconsin is in a virtual dead heat.

One month to the midterms, and as election day draws nearer, polling results are ubiquitous in the media. The Spectrum News/Siena College poll partnership is making headlines throughout the country, and at the network level, like ABC News. A recent Spectrum News/Siena College poll shows a virtual tie in the race for a Wisconsin senate seat. As ABC News points out, the poll shows "fresh signs of the political climate shifting yet again."

An SCRI poll of 655 likely New York State voters shows Governor Hochul with a 17-point lead over her opponent, Rep. Lee Zeldin. The advantage has widen a few points since August polling. The results of the poll were published across the state, including in Buffalo by WGRZ. The voters were also asked what the most important issues are in determining how they will vote. The top two concerns: economic issues and threats to our democracy.

New York's overall Index of Consumer Sentiment is 12.6 points above the national index, according to a recent SCRI survey. Why is that? Spotlight News quoted Don Levy, Ph.D., director of the Siena College Research Institute. “New Yorkers’ collective sentiment continues to outpace the national rate driven by far greater optimism in the New York City area especially when looking to the future. Still, our tale of two states persists. The Gotham-area index is 19 points above upstate."

The Siena Heat Map tracks Siena College mentions in the news all across the country. From June through August, there were more than 2,300 Siena mentions coast-to-coast, including...

The story of a Siena College graduate who retired from teaching but didn't really retire.

David Fahey taught for 43 years and then retired. At 85-years-old, he's thoroughly engrossed in his second act.

Fahey spends three to five hours a day researching history. He talks to scholars, looks at journals, and writes. It's an aggressive schedule, particularly for an 85-year-old historian who is technically retired.

"After retirement, I was freed with so much time. It's so nice to not have to grade papers anymore. I can do whatever I want."

He retired from Miami University's history department a decade ago, and what he wants to do now is write his next book. Fahey, a Loudonville native, has been obsessed with history for as long as he can remember. He earned a degree in history from Siena then his master's and Ph.D. in history from Notre Dame. Recently, he reflected on his career and his future work in an interview with the Oxford Observer.

“A lot of professors retire and dream of moving away, hunting, fishing, being retired,” Fahey said. “Not me. I love what I’m doing.”

Siena Represented and Presented at NSBP

A Great Escape from the Classroom