Skip to Main Content
Home
News
In the News: November 2022 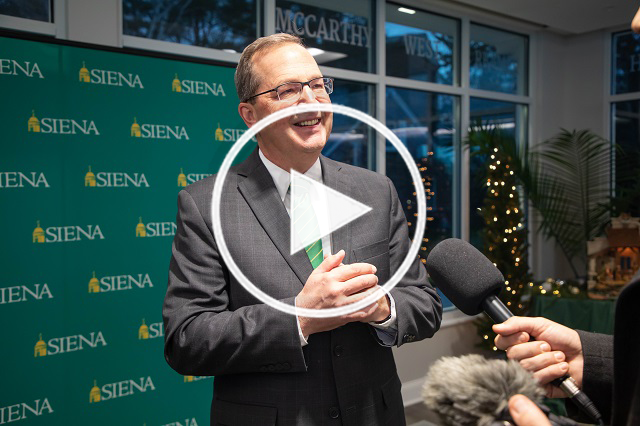 Hours after Chuck Seifert, Ph.D., was appointed the 13th president of Siena College on December 2, he met with assembled media from the Franciscan Friars Commons.

Siena College Board of Trustees Chairman Tom Baldwin '81 emceed the media event, which also included an audience of Trustees, Cabinet members, and selected student leaders. The final speaker, Sam Hearn '23, surprised Dr. Seifert with a Siena jacket embroidered in Siena gold with "President Seifert" above the number 13. He seemed to appreciate the gesture.

Coverage of Dr. Seifert's appointment made front page news in nearly a dozen local and regional media outlets including News10 ABC (above) and NewsChannel 13. Most stories highlighted Dr. Seifert's career pivot from banking and finance to higher education and his unanimous appointment by the Board. The Times Union also included the student perspective.

"He was an incredible mentor," said Hearn. "One thing he's really helped me see is those who have potential but aren't engaged yet. I want to help people reach their potential. Chuck's shown me how to do that."

President Gibson and former College President Fr. Kevin Mullen '75, provincial minister of the Holy Name Province, also spoke at the event, and both were quoted by the Daily Gazette.

"When you look at Chuck Seifert, he's perfectly prepared for this moment," Gibson said. "And we're so grateful that he and Debbie (Seifert's wife) said yes."

"We looked within our home for someone who embodies our value system," Siena's 10th president, Fr. Kevin Mullen, said. "Someone who has experience."

After the event, Dr. Seifert shared with WAMC:

"I've been a member of the community for a long time, but the reality is I still have a lot to learn. I need to listen and pay attention to all the different constituencies and do what I can do to better the College."

Dr. Seifert will begin his term on June 1. There will be an inauguration ceremony on September 21. 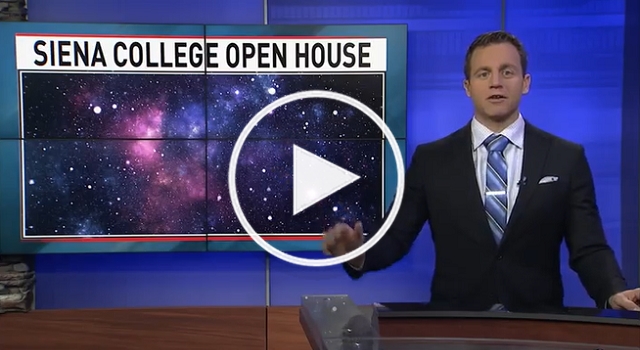 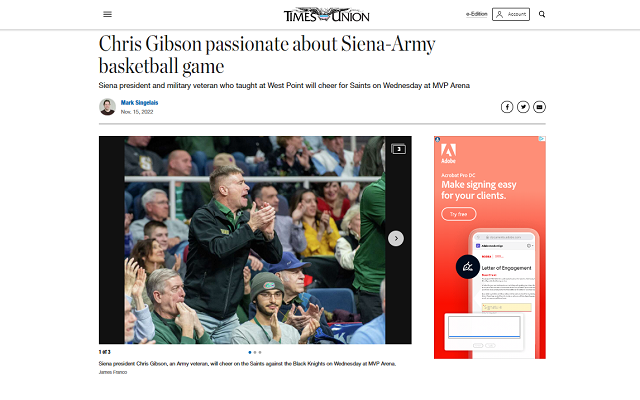 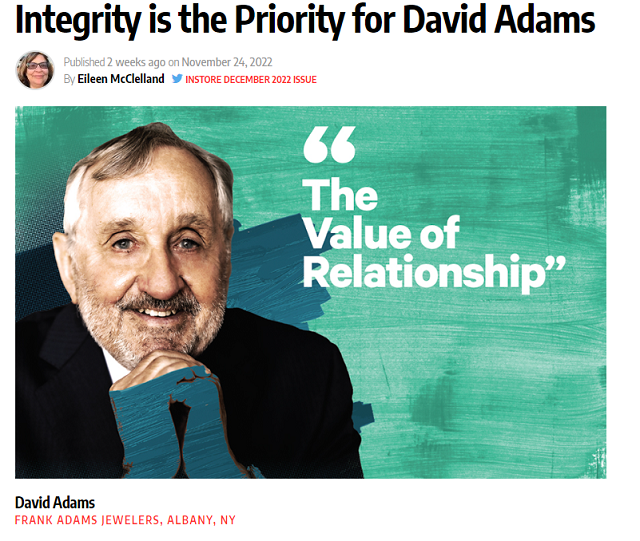 Instore Magazine provides jewelers with jewelry industry news and headlines. The November issue ran a piece about a Siena graduate and his 100-year-old business.

David Adams is the 84-year-old CEO of Frank Adams Jewelers, founded in Albany by his father, Frank, in 1922. By the time David was 22, he had studied diamond grading at the GIA, spent time in the Coast Guard, and earned his degree from Siena College. He had planned to be a dentist, but as he told Instore Magazine, he was lured by the sparkle of the family business.

"I liked the diamond and colored stone business most. The science and the technical features always challenged me."

David runs his father's shop with the third generation, his daughter Kimberly. He hopes to be around long enough to watch the fourth generation, grandson Jeffrey, join the family business. 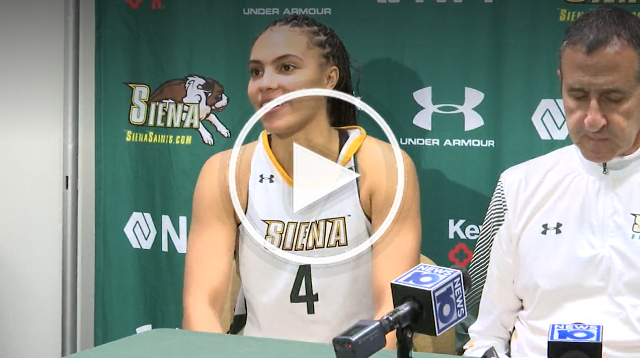 The Capital Region Toys for Tots generated holiday gifts for 240,000 children last year across 15 counties. This year, the Siena basketball teams are aiming even higher.

There are unique challenges facing families and the Toys for Tots organization this season. While rising inflation is squeezing Christmas budgets, Toys for Tots has dealt with a location change and staffing shortages. Siena, as News10 ABC reported, is stepping in with an assist.

The women's basketball team encouraged fans to bring a toy to their December 3 game. The gifts were being collected to support the Marine Corps' 75th year organizing toys for kids in need.

"We understand our privilege, and we want to use our platform to help people who have less than we do." - Jim Jabir, head coach

"All of our fans, we have a bunch of younger girls, and I remember being young coming to Siena games. So it's just great to give back." - Valencia Fontenelle-Posson '25

As the Daily Gazette noted, the men's basketball team also partnered this season with Capital Region Toys for Tots. The article's focus, though, was on Siena's national-headline grabbing third place finish at the ESPN Events Invitational. Siena scored a pair of wins over high-major teams, Florida State and Seton Hall.

"We really just wanted to prove everyone wrong," said Michael Eley '26, "because we were the doubted team there, so having those two wins is big for us." 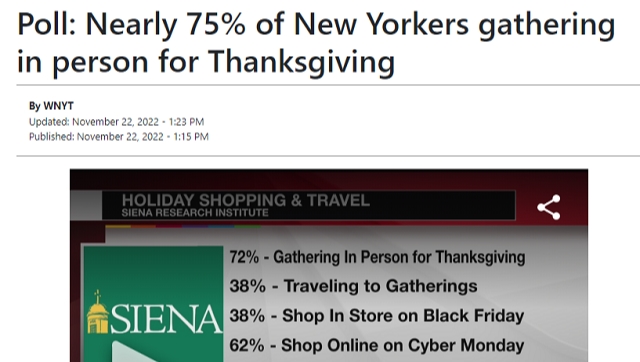 ...72 percent of New Yorkers had plans to share a Thanksgiving meal with friends or family they don't live with.

A Siena College Research Institute poll tracked Thanksgiving weekend plans for New Yorkers. NewsChannel 13 reported on the findings, including Black Friday intentions. Many more New Yorkers planned on Cyber Monday shopping from home instead of Black Friday deals on location. In fact, while only 38 percent of those polled expected to shop in person, 62 percent were adding to their carts online.

...Thanksgiving plans are still being impacted by the pandemic.

WAMC interviewed SCRI Director Don Levy, Ph.D., about the findings in the institute's holiday survey. As noted above, 72 percent of New Yorkers celebrated Thanksgiving with more than just their immediate family. "That number is certainly up dramatically from where we've seen it the last couple of years, when we were well below 50 percent," said Levy. "So, we are getting back to the new normal, it appears. But still, we see that close to one out of every four New Yorkers are saying either not yet or just not for me."

According to a New York Time-Siena College poll, and as reported by The Hill, Fetterman was outpacing his rival by five points on November 1. Once the votes had been tallied days later, Fetterman won the race by almost exactly five points. As noted in the Times Union article above, SCRI correctly predicted nearly every race it polled this midterm season across the political map.

The Siena Heat Map tracks Siena College mentions in the news all across the country. From November 1 through December 4, there were more than 2,400 Siena mentions coast-to-coast, including...

The story of a "toxic flood" in Oklahoma. 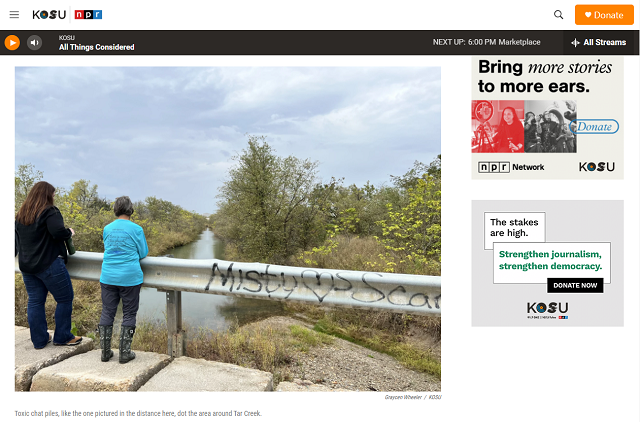 Miami, Oklahoma is criss-crossed with scenic creeks and streams. Unfortunately, much of the bucolic water, like in Tar Creek, contains dangerous levels of lead, zinc, and cadmium caused by old mines that were shut down in the 1960s. When the creek floods, the toxicity of the water poses a major threat to the community.

LEAD Agency and Thriving Earth Exchange are organizations that are working together to build a map that will predict harm. Kate Meierdiercks, Ph.D., associate professor of environmental studies and sciences is assisting with the map, and she spoke to NPR affiliate KOSU in Oklahoma.

“The only questions we can answer are the ones that we have data to answer.”

Meierdiercks and her team have been working to evolve the map adding new data and land ownership. She hopes to hand it over to a local person who can oversee the data and adapt the tool for the future.

“I'm a big proponent of the kind of handing it over so that the community can have more behind-the-scenes access to it and change it as community needs change.”

Happy 10th, and Here's to Many More