Dressed for the occasion in Siena hardhats, physics students and faculty helped the team from BBL Construction Services finish assembling the newest addition to campus, a radio telescope. The piece of equipment was so large that a crane was needed to move its pieces. Nestled on the grass below the bridge between Roger Bacon Hall and Morrell Science Center, the large telescope with a Siena-green base is a hard sight to miss. The mirror on top, which is used to rapidly and efficiently scan the sky, is more than two meters in diameter, and it shines like an educational beacon for students interested in cosmic research and furthering the discovery of our expanding universe.

Also known as Viper, the telescope took a long path to Siena. It was previously in the South Pole for several years, used to view and research cosmic background radiation. Then in 2012, thanks to the National Science Foundation, the telescope was shipped in pieces from California to Loudonville. Since then, students, faculty and Siena's facilities management team have enthusiastically tackled the job of cleaning and assembling parts of the massive telescope, all without a set of instructions.

“To build something like this, to see it being in boxes...to actually getting some data from this instrument, it’s a full cycle,” said School of Science Dean Allan Weatherwax, Ph.D., the lead faculty member on the telescope project. He described the experience of assembling the research tool as,“just fun to do.”

Once it is up and running, Weatherwax hopes that the School of Science, particularly the newly added astronomy minor, will benefit from the hands-on research the telescope will allow students to conduct. It appears that this telescope will also broaden and bolster Siena’s connections with other institutions seeking to gather data about the cosmos, such as Carnegie Mellon University, University of Chicago and Harvard Smithsonian.

After assembling the final piece of the telescope, which took less than two hours, the faculty and students involved in the project stood back to admire the result of their efforts. One of those students was physics major Thomas Dunn ’15. He worked on the telescope project since it arrived.

“A lot of work and a lot of elbow grease went into this,” Dunn said. “You don’t realize it at first but then, once it all comes together it’s just a big reward.”

Fellow physics major David Knapick ’16 is equally excited about the outcome of the telescope project. He said the group faced many challenges putting together the telescope, but seeing the assembly run smoothly was a great feeling. “All that hard work and all that time in the lab paid off,” Knapick said. He added that having such a powerful piece of equipment on campus is a major accomplishment for Siena. “It’s right here in our own backyard, that makes it a great experience for us; we’re a small college that can accomplish great things,” Knapick said. 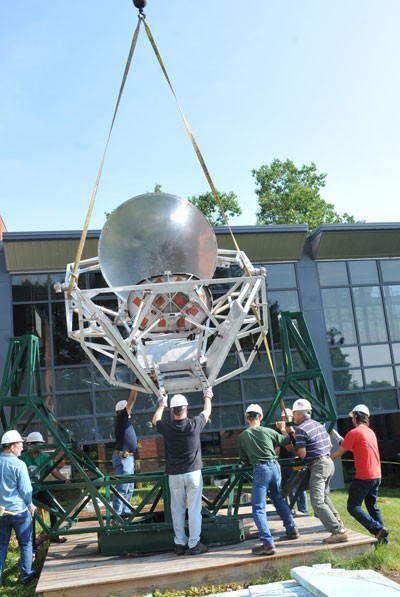 Now that the assembly of the tentatively-named Siena Radio Telescope, or SRT, is complete, students and faculty are ready to add instrumentation and being collecting data or, as Weatherwax said in layman’s terms, “Now we’re ready to actually do some science.”

Learning to Lead and Other Labs

Every Student Has a Story: Emma Beals '24

To Lead Boldly for Racial Justice