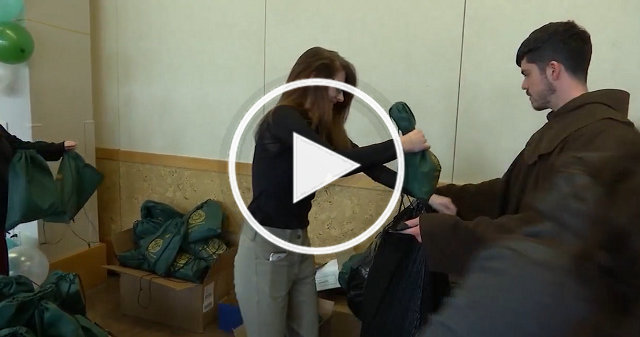 Siena students organized an assembly line in the Sarazen Student Union to fill care bags for survivors of sexual assault. News10 ABC was on campus to tell the story.

The care bags included toiletries, hygiene items, and other essentials for sexual assault survivors. They were also packed with something non-essential, but perhaps equally important – words of encouragement. The messages from the Saints are delivered to survivors who are typically alone and in their darkest hour. The note is a hopeful reminder that there are strangers in the community who care for them.

"I actually can't wait to give one of these bags to one of our patients because this is the first time that we've had so many comfort items in the bag."

"Over the years, I've actually been a forensic nurse examiner for six years, and every year it just seems like we're seeing more and more patients."

Siena students are determined to draw attention to the violence, while also showing compassion, through action, for the survivors.

"I think it's really important that people are educated about this and that we cause awareness for something so significant." 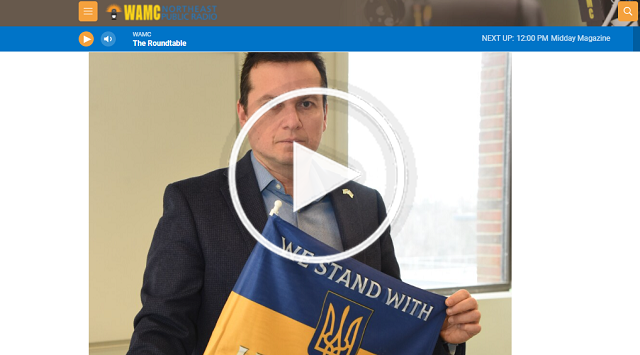 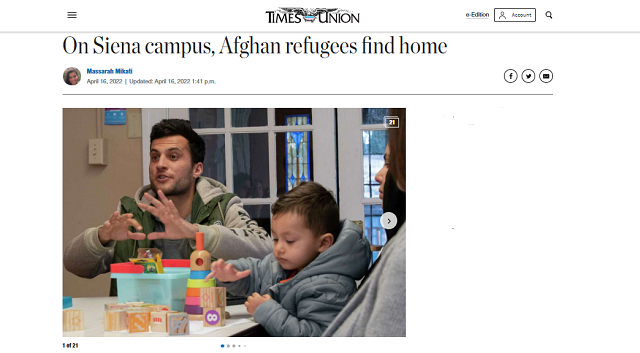 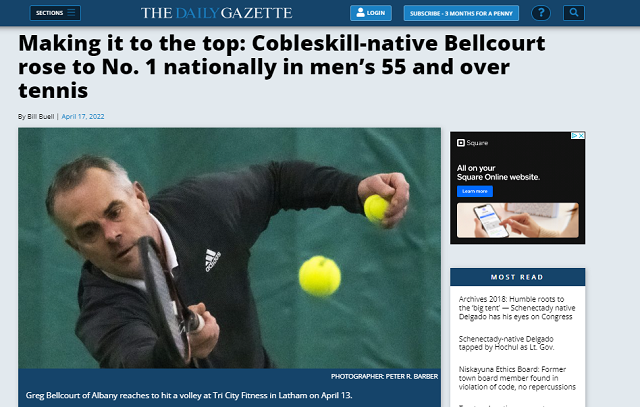 Last year, a former Siena student athlete played his way to the number one ranking in the country. Perhaps most newsworthy, he's dominating in a sport that's different than the one he played at Siena.

Greg Bellcourt '87 was a standout soccer player growing up in Cobleskill and drew the attention of college coaches. He chose Siena, and played three seasons as a forward for the green and gold. After graduation, he took a job teaching history at Queensbury High School. That job led to a side job which, 34 years later, led to the number one ranking in the U.S.

"The (athletic director) approached me and said, 'you're gonna be the tennis coach.' I said, 'oh, really,' and I ended up coaching the Queensbury team from 1987 to 1992."

He continued coaching, in college and then at a high school in the Boston area, and continued to work on his own game. And as the Daily Gazette reported in its story, from 2020 to 2021, Bellcourt put together a 12-month span of tennis, "...unparalleled by any other Capital Region tennis player, ever."

"I wanted to see what I could do, take a year to get ready and then see if I could really get the best out of me. Back in 2019, I started training and eating well, and looking for people better than me to play with. And all those nagging injuries I had sort of stopped. I felt fit and ready to give it my best shot."

Bellcourt traveled to national events around the country, winning many of them, and he rose to number one in the country for men 55 and over, according to the United States Tennis Association. Bellcourt hasn't played in enough tournaments to retain the ranking, but is more focused on his job teaching tennis at Tri-City Fitness.

"What brings me to work each day now is the younger kids I'm working with. I want to find the next really good player, and we have a bunch of kids that I want to help become as good as they can. That's what I love doing these days."

Bellcourt played striker for Siena for three seasons, from 1983-1986. He scored eight goals and recorded an assist between his sophomore and junior seasons.

Because of his work schedule, the former number one tennis player in the country men's 55 and over hasn't played much this season and therefore, wasn't able to defend his status. However, the Siena alumnus is anxious to get back on the court this summer. 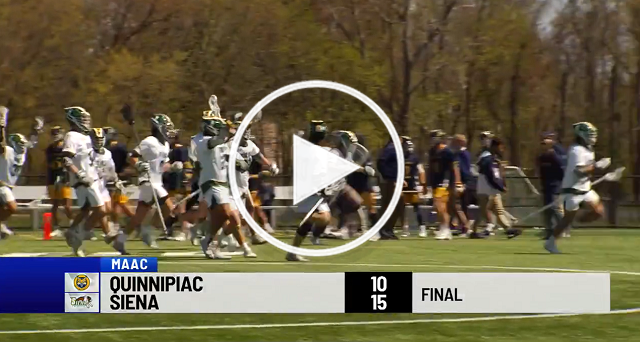 The Siena men's lacrosse team lost all seven conference games last season; six of the seven losses were by two goals or fewer. This season, the Saints started 1-3 in MAAC play, and all three losses were by a single goal. A year of heartache made the celebration, caught on camera by News10 ABC, even sweeter.

Following a one-goal loss (of course it was by one goal) at home to Manhattan on April 9, the Saints would need to win their last two conference games to qualify for the MAAC tournament. To make the task more daunting, their next game was against a St. Bonaventure team that hadn't lost a MAAC game all year. Siena won 14-11.

Following a non-conference win over Holy Cross, the Saints then needed to beat Quinnipiac, on Senior Day, to qualify for the postseason. Siena fell behind two-nothing, before ripping off five straight goals on their way to a 15-10 victory. News10 ABC had the highlights.

"Since we've gotten here, we came in here as a staff with this class, the senior class that we honored today, and our goal has been to get to the MAAC playoffs and have an opportunity to win the MAAC championship. Our first year (in 2019) we were close, but it came down to the last game where it didn't happen. To finally get to a point where we earn the right to get into the MAAC playoffs on our own, and not have to wait to see if something else happened, it's priceless. It's what we've been working for the whole time."

Winners of three straight, Siena plays top-seeded St. Bonaventure in the MAAC semifinals on Thursday, May 5, at 4:00 p.m. The Siena women's team are co-regular season champions and will host Fairfield in a MAAC semifinal game Friday, May 6, at noon.

In other sports news...

Yahoo! picked up the story of Siena soccer player Bilal Hersi '24 who recently made his debut with the Somali national soccer team. Hersi was born in Georgia and played high school soccer in Maine, but his parents are originally from Somalia. He said of his debut...

...voters, across the board, support recent amendments to the 2019 bail reform law. But, there's a 'but.'

According to a Siena College Research Institute poll, a strong majority of New York voters across party, region, race, and gender support changes to bail reform that grant judges more power and add more gun-related crimes to the list of bailable offenses. But, as WSYR-TV in Syracuse noted in its coverage, 38 percent of respondents believe the amended bail law will have no impact on the crime rate in New York.

In a quote that appeared in the Times Union, Don Levy, director of the Siena College Research Institute summed up the latest concerns of consumers. "Inflation plus war equals uncertainty for New York consumers." The SCRI quarterly index of consumer sentiment found that confidence has slipped for the first time since 2021. However, New York's consumer index is 8.6 points above the national index, which took a more severe downward turn.

...New Yorkers are in favor of a temporary suspension of the gas tax, but they do not support tax dollars being directed toward a new stadium for the Buffalo Bills.

From June 1 through the end of the calendar year, New Yorkers will save $0.16 per gallon at the pump. According to a recent SCRI poll, 73 percent of New Yorkers approve of suspending the gas tax. However, as noted by WGRZ-TV in Buffalo, New Yorkers do not approve of the state kicking in $600 million to build a new stadium for the Bills. Sixty-three percent of those polled disagree with the state's contribution to the project.

The Siena Heat Map tracks Siena College mentions in the news all across the country. Throughout April, there were more than 1,400 Siena mentions coast-to-coast, including...

The story of a recent Siena graduate who turned her passion for baking into a career with wheels.

Jordan Boyle '21 took a job after graduation that gave her the flexibility to work from home. She hated it. Jordan wasn't doing what she wanted where she wanted, so she started her own business. Jordan's no longer working from home, but you can't beat the commute.

Jordan made decorative cakes while at Siena and the marketing major marketed her hobby as "Jordan's Tiny Cakes." After graduation, she wasn't happy with her first step into the real world, so she reflected back on what makes her happy. The Connecticut native told her story to her hometown NBC station.

"I was working from home and was miserable. One day, I was just like, what about a food truck? I just want to have my own business. I don't want to be tied down to any specific place. My mom and brother looked at me like I was crazy. That was in September; now we're here."

Jordan's bistro on wheels, "Peanut's Place," is serving baked goods, brunch items, and coffee drinks from a parking lot in Thomaston, CT. She opened her doors, or in this case – the truck window – on March 30, and the support of the community has been overwhelming.

"I couldn't be prouder of her. She had a dream and she's made it a reality."

Jordan and her father started selling her homemade desserts when she was 12. Eight years ago, her father passed away. The name of the business is a tribute to her first business partner.

"His nickname for me was 'Peanut,' and I don't think I have a single memory of him calling me by my first name."

A New Program That's One of a Kind