All About the Music Scene at Siena College

Between student groups and campus events, courses and open-mic nights, your college years can be a prime time for exploring your long-standing love of music or discovering a passion you’ve never had before. At Siena College, in particular, it’s a fantastic place to stop watching The Voice and start hearing your own. 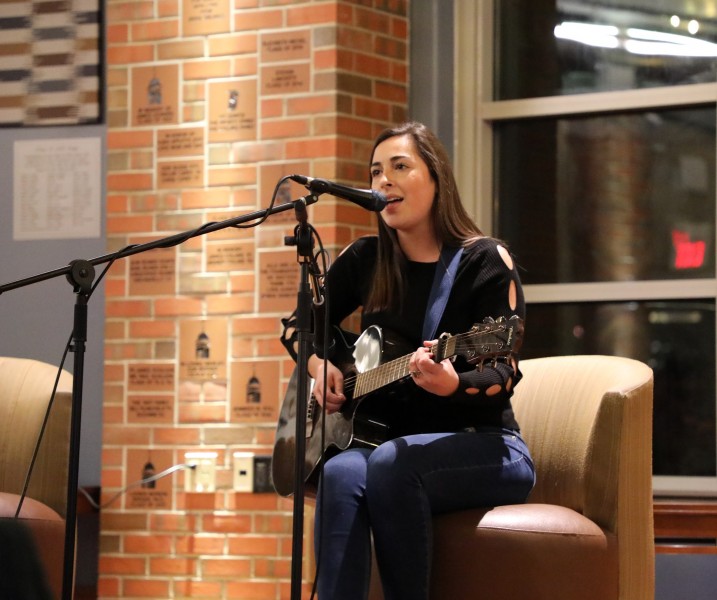 Take it from Emma Henderschedt, a senior at Siena who studies social work and pre-law—and is super involved with music on campus. “I have been singing with Psalm 150 since my freshman year,” she told us. “This is the praise band that performs at the weekend masses on campus. I also run a student-led music/worship group on Wednesday nights, and I’m a canter for mass and other campus-wide events. In addition, I have had the chance to perform at events such as a scholarship dinner and others.”

Here’s a quick run-down of the many opportunities to get involved musically at Siena. For a deeper dive into any of these, reach out to our admissions team anytime. (We’d be happy to put you in touch with a student, too!)

Our chorus is open to all—no auditions necessary. They  rehearse on Mondays, Wednesdays and Fridays at 11:30 and perform at many campus events. (In fact, they’ll be singing carols during lunch at our Accepted Students Day in December!)

This is a select auditioned ensemble of about 12-16 voices. Auditions for Chamber Singers are held in April for the following academic year, so Saints can audition as early as their second semester of freshman year.

Creating a truly unique musical and learning experience, the orchestra here brings together students on campus with local community members for rehearsals and performances. Rehearsals are Thursdays throughout the academic year.

A student group that’s open to any Siena students with a love of music, Lost in Sound puts together pieces of various levels of difficulty to sing at a variety of performances and events, including the annual Cabaret.

Interested in theater? Stage III is Siena’s student-run theater club, made up of actors, directors, designers, managers and technicians. They meet once a week to produce several shows throughout the year, and also organize trips to local productions.

An open mic, if you’re not familiar with the term, refers to a live show where anyone can jump up to the mic and try out their new material for an audience. They’re typically held at a coffeehouse or nightclub; at Siena, they’re held monthly in our student center, Casey’s—where a lot of our fun events and activities occur.

These are annual multicultural talent shows where Siena students can audition to show off their skills in singing, dancing, the spoken word and more. Emma says these are some of her favorite events on campus, and it’s easy to see why. The crowds are always awesome, and it’s so much fun to see Saints come together to cheer each other on in the name of music.

As a school with a Catholic Franciscan heritage, Siena also holds many religious-based performance opportunities as well. There is an Advent concert, a Lent concert, and opportunities to canter or perform at masses, for example. Again, we encourage you to reach out to us at admissions to find out more!

And if you’re really into music—as in, it could perhaps be part of your career one day—check out Siena’s creative arts major. With tracks in theatre, music, broadcast journalism and the visual arts—and cutting-edge facilities like a private rehearsal room and television station—there’s a lot to explore. (And lots of careers to pursue.)

FROM SIENA TO STAPLES: Q&A WITH SIENA ALUM KRISTINA FERRARA ‘08