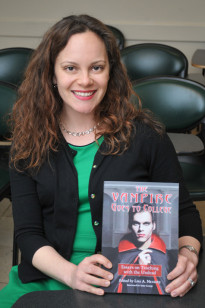 Lisa Nevárez joined the English Department at Siena College in 2002. She is a Professor of English, and directs the Multicultural Studies minor. She holds a Ph.D in Comparative Literature from Vanderbilt University, and a B.A. in English from the University of San Francisco. Dr. Nevárez teaches courses in Latino/a Literature, early 19th-century British literature, and literary theory. Among her research interests—and teaching passions—lie vampires, the Gothic, and horror fiction. She served as editor of the essay collection The Vampire Goes to College: Essays on Teaching with the Undead (McFarland Press, 2014). She has an article on Breaking Dawn included in The Twilight Saga: Exploring the Global Phenomenon (Ed. Claudia Bucciferro, Scarecrow Press, 2013). Her essay on Lady Maria Nugent’s India Journal appeared in the edited collection The Male Empire under the Female Gaze: The British Raj and the Memsahib (Eds. Rajeshwar Mittapall and Susmita Roye, Cambria Press, 2013). Other publications include articles in the journals Decimonónica, Romanticism on the Net, and Media History, and in the edited collection The Anatomy of Bodyworlds. She regularly attends the national meetings of the Popular Culture Association (PCA). Her current research project examines Latina identity in vampire-themed graphic novels.

In my teaching I strive to educate students not only about the background of and context for a literary work, but also to foster in them the ability to read critically and argue persuasively, not to mention to write effectively. Our Siena students bring wonderful insights into the classroom, and I enjoy working with them on ways to further develop their ideas and communicate them to their peers and the rest of the community

What I most love about Siena is the opportunity to work with some wonderful students! This takes place in my classroom, as I get to know students on a first name basis through our conversations about literature, to my office when I meet with my advisees and we chat about courses and careers, and finally to other on-campus spaces as I collaborate with students and colleagues on diversity-related projects that speak to the entire campus community.

I teach a variety of courses at Siena, and I cannot really pick a favorite as they are all so different! I teach Latino/a Literature, and through that class strive to incorporate themes of diversity into our on campus community, as well as through my role as Director of the Multicultural Studies minor. My doctoral work is in early 19th-century British literature, so I often teach Romanticism and English Literature II and I greatly enjoy those times when I can share my love of the work of Jane Austen, Lord Byron, and other authors with my students. Finally, my teaching and research absolutely come together when I teach courses focused on "monsters." I teach The Horror Novel and The Vampire, and I delight in exploring with students our culture's longstanding fascination with those entities.

My research interests include the Gothic, vampire and horror fiction, and Romanticism, as well as Latino/a literature.