Read the latest Siena College updates and find answers to our most frequently asked questions.

More information
Back to Faculty Directory 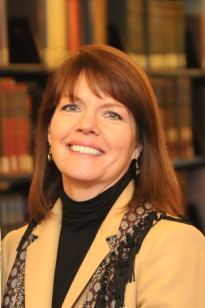 Born in Washington, D.C., I attended mostly Catholic schools and graduated with a B.A. from the George Washington University in American Studies, combining coursework in history, literature, art history, historic preservation, material culture, and museum studies.  The next few years included a graduate semester at Trinity College, Dublin and a stint as a paralegal.  I started my serious graduate work at Columbia University, where I received an M.A. in U.S. history, and was then recruited to the University of Southern California by Dr. Lois Banner, a pioneer in women’s history, where I received a Ph.D. in U.S. history and a Certificate in Gender Studies.  My dissertation asked why there were so many female film producers and directors in the silent era, and why they all seemed to disappear after World War I (hint:  Wall Street).  My teaching career began in Southern California as an adjunct, and my first full-time position was at Texas A&M: Corpus Christi. My family moved to the Capital District when I began teaching at Siena in 1998. I feel very fortunate to live in a historically rich area, and I have been involved in local museums and historic sites since we arrived.  Personal interests include running and, of course, visiting museums.

It is my job to meet students where they are in terms of skills, to help students to develop those skills, to help students get the most value from their academic experience at Siena, and to help students find their way to the next phase, whether it is a career or graduate school.  It is my job to stay on top of my field, and to keep my door and my mind open.  It is the student’s job to do the work, to be engaged inside and outside of the classroom, and to seize the many opportunities that Siena offers, from internships, to study abroad, to innovative programs. The great advantage of Siena is its size: I know students by name, and even if they are not history or American Studies majors, I am interested in helping them get to where they want to go. My favorite teaching moment is when a student suddenly recognizes the personal significance of something previously dismissed as unimportant, whether “trivial”  (advertising, film, art, fashion) or “irrelevant “ (academic theories, the experiences of peoples from another time, place, or social identity). I love the light bulb moment.

I love the students at Siena, who are known for their courtesy.  I particularly like teaching first year students, who range from “I am not sure about this” to “I know exactly what I want and I am willing to work hard to get it.” I love the flexibility and breadth of courses that I can offer at Siena.  In addition to my position in the history department, I began directing the American Studies Program in 2001, and have served as co-director with Dr. Christiane Farnan (English) since 2007. American Studies allows me to teach in an interdisciplinary way, which is a good thing because my teaching interests include everything I studied since I entered college:  American culture, public history, business history, gender, film, and the workplace. American Studies allows me to incorporate literature, art, and public history, and draw from sociology, economics, and political science to consider the American experience from all angles.

Since I have the joy of teaching what I wish, my favorite courses are whatever I am teaching that semester.

I am interested in the intersection of gender, work, and culture.  Right now I am working on a book manuscript tentatively entitled “Corner Office.” It considers the role of masculinity as the corporate form and its human representative, the business executive, emerged and developed in the twentieth century.  In particular, I am trying to untangle the intellectual and cultural fusion of masculinity and capitalism that is evident in the tremendous difficulties still faced by women in the highest corporate ranks. To do so I am looking at corporate archives, business education, industrial psychology, health manuals for businessmen, etiquette books, and representations of business executives in film, fiction, and advertising.  Thus far two Siena students have conducted archival research with me on this project, and each has delivered part of a co-written academic paper, one at a national conference and one at an international conference.