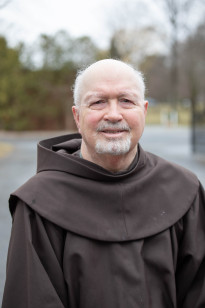 Fr. Dennis Tamburello is Professor of Religious Studies at Siena College in Loudonville, NY. He received a B.A. in Modern Languages (French) in 1975 from Siena College, an M.A. in Theology in 1980 from the Washington Theological Union, and a Ph.D. in Historical Theology in 1990 from the Divinity School of the University of Chicago. His areas of scholarly research are the Reformation (especially John Calvin), mysticism, and interreligious dialogue. Fr. Dennis is a Friar in Residence in Snyder Hall (student residence) and also serves as a chaplain at several New York State correctional facilities. He is the author of Union with Christ: John Calvin and the Mysticism of St. Bernard (Westminster John Knox Press, 1994), Ordinary Mysticism (Paulist Press, 1996), and Bernard of Clairvaux: Essential Writings (Crossroad Publishing Co., 2000).

My teaching Philosophy focuses on the education of the whole person. Education is not just about nourishing our heads, but also about transforming our hearts so that we will be good citizens in the world, making it a better place. I believe that students learn best when they are actively involved in their own education. I try to make my classes as interactive as possible, and to allow students to express freely their thoughts and their questions.

I love teaching at Siena for many reasons. Our students are a joy to be with, and most of them strive very hard to succeed academically. I also love that I can live with them in the Residence Halls, and serve as a chaperone on their service trips. I think I am teaching in a different way in these contexts. I am blessed with wonderful colleagues, who are deeply committed to good pedagogy and to excelling in their fields -- and many of whom have become dear friends, both in my department and in the college in general. Finally, I love that I am here with a great group of friars and that we can share our experiences of the Franciscan tradition with the Siena community.