Siena College Commencement Weekend Events will be held Saturday, May 29 through Sunday, May 30. Please visit our Commencement webpage for the most updated information.

The Untold Story of... Rose Seggos

1. I am a native New Yorker.  I grew up in a Watertown, a little town that is so far north that it’s almost in Canada!  The winters are some of the coldest and snowiest in the entire country but the summers are absolutely perfect.  I’ve spent almost every summer of my life on the St. Lawrence River in the Thousand Islands, which is just north of Watertown.  In fact, the River serves as the border between the U.S. and Canada.  Luckily, my husband and children love it as much as I do and are willing to drive back and forth from Albany all summer long!

2. Even though I grew up in northern NY, my family has deep roots in the Bronx.  My mother immigrated to the Bronx from Sicily when she was a young girl.  Her family settled in the “Little Italy” section of the Bronx near Fordham University.  My father grew up just down the Pelham Parkway in Morris Park.  My entire extended family still lives in the area which gives me an excuse to head over to Arthur Ave and stock up on pizza, fresh cheese, and cannolis whenever I visit!

3. Of course, when I moved downstate to attend law school in Westchester County, I settled in the Bronx and lived there for eight years. I’m sure I don’t need to say it, but we’re a Yankees family!  In fact, while I lived in the Bronx, we had season tickets for every Sunday game.   When I moved to Albany, I would listen to the Yankees on the radio and the familiar voices of John Sterling and Suzyn Waldman helped me feel at home in my new city.

4. As a student at Pace Law School, I participated in the Environmental Litigation Clinic that assisted the non-profit organization, Riverkeeper in litigation for the protection of the Hudson River.  While I was there, I had the privilege of working with two of Len Cutler’s legal fellows that were placed in the Clinic for the summer.  It was my first real introduction to the Siena community, and I must say they represented it well.  Even though they were college students doing the same work as law students, they were undeterred and hard working.  They were also a ton of fun! I have fond memories of capture the flag, seining in the Hudson River, Mexican food, and softball that I will treasure forever.

5. Before becoming a lawyer, I had aspirations of becoming an archaeologist.  In fact, during college I had the amazing opportunity to work on the excavation of a mastodon in Hyde Park, NY.  In the summer of 2001, just before I started law school, I worked on the Army base, Ft. Drum in my home town of Watertown on an archaeological dig.  It turns out that Dr. Gibson was stationed at Ft. Drum at the same time I was working there.   We never ran into each other (that we know of), but it does prove what a small world we live in!

6. When I married my husband, Basil, we were gifted a stay at an eco-resort in Costa Rica on the Osa Peninsula.  In February of 2020, just before the world went on “pause,” we were able to take our girls back to the Osa for an amazing stay in an open air house on the beach just inside the tree line of the rainforest.  I am so grateful that we had that little slice of normalcy before everything shut down.  Of course, we haven’t traveled since but I am definitely planning our next trip to Costa Rica, even if it is still very far off on the horizon.

7. I have three amazing children, two of which are twins. Being a mother of multiples is not for the faint of heart, but it is a truly magical connection between siblings that I am so grateful to be able to witness every day.   It provides an almost daily opportunity to practice my negotiation and mediation skills!

8. I am also a mother to two amazing fur babies, my Goldendoodles, Clementine and Brie.  When my kids were very young I started making up stories about the dogs.  In these stories, both dogs are from Doodleville, which I believe is somewhere in eastern Europe.  They usually get caught by me in public places pretending to be a human.  We still tell “Clementine stories” to this day.  In fact, some of our family and friends love the Clementine stories so much that during quarantine we started a Facebook group to continue to tell the stories, even if we couldn’t all be together!

9. My other baby is a 1974 VW beetle that my husband gave me as an anniversary present a few years ago.  I’ve wanted a “bug” since I was able to drive (and probably even earlier than that).  When I was sixteen, my father told me that he had bought me a beetle for my birthday but when I unwrapped the box that I assumed held the keys to my new car, I discovered a miniature diecast model of my dream car.  So, when my husband gave me the keys to the car, I refused to believe him until I saw it with my own eyes!

10. One of my favorite places, aside from the St. Lawrence River, is Thatcher Park.  I am never happier than when I am on a trail “run” (it’s really more of a slow jog) getting lost with my dogs on a beautiful summer day. 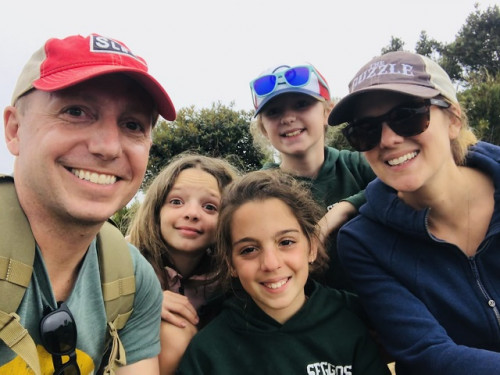